Once the malt-o-meal was ready to rock, I could not escape the gravity of the couch, where my wife taps on her laptop and occasionally calls a client, and where she had already arrayed everything for us to watch some dumb Pixar abomination.  I had already lodged my protests, my Saturday morning doesn’t last forever– but it was futile.  Now listen, I have a measure of distaste for Pixar because they are ruining animation.  If I could bang one famous cartoon character it would be someone from the era of true, organic animation– the original Cinderella.  Next in line would be Sleeping Beauty, whatever her name is (not to be confused with Snow White), followed by, oh I don’t know, someone with Bella’s face and Ariel’s hair color maybe.  Oh and yes, my wife gave me a Tinker Bell ornament as a Christmas present a week ago– Tink is my all-time favorite but getting down with a tiny pixie is a stretch of the imagination.

Evidently my dad once told my wife, behind my back, that I have Peter Pan syndrome.

But Pixar is about ideas, not pretty animation, and let’s face it, sometimes it can be entertaining no matter how appalling the visuals are.  Pixar is like a fiercely intelligent romantic partner who is unattractive as shit.  So this morning I had to watch Inside Out.  The main character is a cute girl– my wife wants to spawn these things, and it’s the depiction of everyday life in playful movies like Inside Out that makes the idea of children slightly less scary to me. As I watched the main girl’s emotions become personified by cartoon characters in a control room, I thought about how metalheads could really learn a lot from this.

People are relentless in talking about emotions in music.  What these emotions are is less clear. Also, what people are less prone to speak of is the fact that humans experience emotion by way of a set of tendencies towards discreet personality states, which themselves have been constructed over time as means of both integrating and interfacing with long-term memory.  According to at least one psychologist, Inside Out is fairly accurate, and the reason Pixar movies make people so emotional is that they usually hit a home run depicting the commonalities of human life. 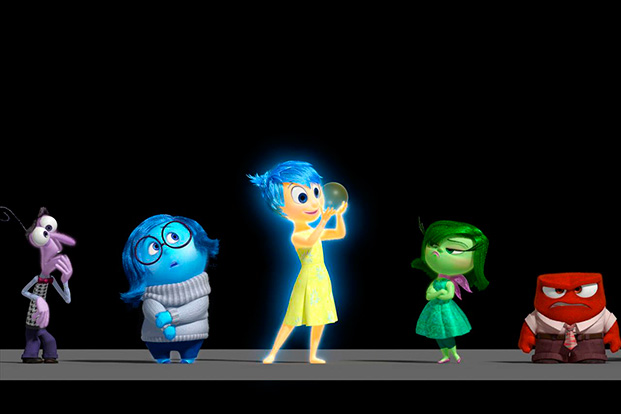 A traumatic life experience causes the main character in Inside Out to suffer a change in the stability and predictability of her personality states.  The trauma in the movie involved a move to a new city when the main character is 11.  Myself?  I had an idyllic childhood playing in fields of wildflowers, so I couldn’t relate to the moving thing.  But I thought of my own major turning points– moving away from home to go to college (and during college, changing from “good kid” identity to “drug-slamming burnout” identity); surrendering my youthful ambitions to a boring office job; and finally, much later, getting married.  Each of these stages reflected a veritable destruction of what constituted my personality up to that point.

I maintain that most of the time, we listen to music because it is entertaining or makes us happy.  Setting aside, for this experiment, the subject of listening to Pantera or Six Feet Under for catharsis, I want to think about the music experience as something that is directly pleasurable.

Among the metal-as-instrumental-voyage people, claims are made that individual passages in a composition invoke different feelings– one might be sorrow, another ecstasy.  However, this seems patently dishonest to me.

The musician may have felt a certain way– and the music may sound like the corresponding emotion– but I don’t think many listeners experience the music as a succession of actual subjective moods themselves.  When listening to folk metal (or 00s melodi-core, for that matter) do your own subjective states fluctuate every minute or so between frothy rage and sublime bliss?  No; I daresay that if you were constituted of such a hair-trigger emotional makeup you would avoid such “dynamic” music like the plague.

For most of us, the experience is in fact both more basic and more abstract.  It’s basic, because the difference between a moody passage and a harsh passage is really little more than a change of timbre.  It’s interesting because variation is interesting in and of itself.

The experience is abstract because the different musical “moods” make us think of what different moods symbolize or mean to us.  But thinking about something is all together different from actually experiencing the mood firsthand.

Right now I am pointing mainly at various forms of metalcore, folk metal, experimental black metal, “post-metal”, and progressive rock that interpolate passages of light and shade.  Sure, the first time I listen to a folk metal album I may be tricked into falling into a genuine nostalgic emotional state during the opening section of peaceful acoustic strumming and babbling brook sound effects.  But then, when the primitive black metal section kicks in, it’s not like I suddenly become filled with rage and hopelessness.  No.  I just experience irritation at being yanked out of the preceding peaceful reverie.  Now you can say that reaction is the point, but at the end of the day that is a pretty cheap trick, and one I am going to learn from quickly.

We learn to hear music based on associations and expectations and life experiences.  After learning that every single folk metal album in existence is going to thrash its melodic opening into oblivion a minute later, I will quickly stop letting the intro sequences of such albums lull me into having an emotional reaction.  Part of my critique of the, shall we say “less thematically-consistent” forms of music, then, is that they rely chiefly on cheap parlor tricks that lose their potency the first time you hear anything from the whole genre (yes, I understand that there are folk metal exceptions that are thematically consistent, like Agalloch’s The White).  Now I do recognize that there is one functional justification for folk metal’s interposing of acoustic strumming with irruptions of black metal screeching– it makes for interesting experiences if you fall asleep to it.

But generally speaking a real band will never resort to such clichéd parlor tricks.  For example, there are some moments of genuine musical darkness scattered across Static by Huntress.  The song “Mania” borders on doom metal and captures the fear of losing oneself.  However, the music of “Mania” does not interrupt the genuine aura of ecstatic energy that suffuses the album.  Instead, the darker textures add tension and dynamics.  In other words, instead of altering the wild mood of the album, the menacing parts actually brighten and highlight the overall theme of joyous, reckless abandon.  Also, we’re talking emotional contrast across the level of the album here, not the individual song.  The goal is not to achieve two different contradictory emotional states in one song, it’s about fueling one emotional state across the course of an album until it blows you through the roof.  We all recognize that, it’s called contrast and album flow.  On the other hand, slamming two completely disparate styles together, essentially putting two songs together in denial of all songwriting logic– that is called shit songwriting.  The most extreme example is also the most ubiquitous– the harsh verse / saccharine clean singing chorus / breakdown hybrid– though I suppose you could argue that bands like Eskimo Callboy and IWrestledABearOnce take it to such an absurd place that it transcends any critique.

Metalcore is so easy to tear apart that it isn’t even funny, and besides, it’s like beating a dead horse.  My real critique of thematically-inconsistent music is the concept of what I call micro-emotions, prevalent in the dark progressive rock beloved by the metal hipsters (e.g. Intronaut, Arcturus, modern Enslaved, Rosetta, modern Paradise Lost, and dozens of nameless ones that only appear on Decibel and MetalSucks year-end lists).  These micro-emotions are emotions that are alleged to exist and correspond to certain passages in an album, but in fact are mere phantasms.

In truth, there is not a different emotional state correlated with each different note that exists.  For one thing, there are not enough human emotions.  We each have a handful of emotional states that we tend to slide into.  On the happy side, there is the ecstasy of freedom, of falling in love, of conquest, of discovery, of adventure.  Then there is nostalgia related to memories of those aforementioned sources of ecstasy, together with sentimentality about familial and fraternal love.  On the unhappy side we have anger and sadness.  Any one of these states besides anger– ecstasy, nostalgia/sentimentality, and sadness– can be infinitely sublime.  However, someone who is emotionally stunted, or doesn’t possess the requisite life experience, might not relate to those big emotions.

Music that denies the basic, “big”, potentially sublime emotions– and instead posits the existence of tiny, tinny, nuanced, subtle micro-emotion– is both dishonest and unfulfilling (usually hipster music).  The sublime is nearly the opposite of subtle.  Sublime emotions, be they made of infinitely subtle ingredients or not, are beautiful and possibly overwhelming:  people don’t cry tears of joy because they are experiencing a “subtle” emotion.

You know my opinion– if you’re a musician and can’t do big emotion, then just go for rhythmic/structural sophistication a la death metal.

But hey, what do I know.  Maybe I simply have not discovered the nuanced emotional palette that enables a person to skip from jumping with joy to weeping all in one composition.

One time when I was nine or so I said I hated music, probably because I was mad that I didn’t get it.  A decade later, when I learned that Led Zeppelin went hand in hand with falling in love and getting high and getting off, I had a very different attitude.  I’m not even saying that musical meaning is socially constructed.  In fact I would argue against that hypothesis.  Hell, if you want to know the truth I think the godly music is discovered pre-existing in the Akashic field or whatever, left for us by the Gods, and can convey powerful emotions and complex ideas.  But you have to live life a little to unlock the secrets to hearing it.