The metal-herd isn’t into the wild & crazy lifestyle I talked about in my last post.  Maybe they are like my wife (if my calculations are correct, she is Lawful in alignment, using Dungeons & Dragons terms, with a distaste for genuine chaos).  Or maybe the metal-herds are– well, let’s not sugarcoat it.  Most are sweet, virginal, oh so jealous haters.

Certain Decibelite critics face a genuine challenge with Huntress, Blood Ceremony, Avenged Sevenfold, the most popular albums from Corrosion of Conformity, AC/DC, Metallica, and Megadeth, and can even balk at Municipal Waste.  Not to mention ALL ROCK & ROLL.  They pay lip service to Rob Halford only because it is metal law to do so.

For the stoic who doesn’t welcome the intrusion, hearing the diamond-sharp voice of Jill Janus is like looking at the sun.  It is a call to live life.  The euphoric guitar solos of Avenged Sevenfold threaten to tear the drapes down and blast light on the shoe-gazing stoics and bedroom skeptics.  Municipal Waste embody a larger-than-life spirit from the past that awakens uncomfortable feelings– of having missed out on something fun.

The oppressed modern metalhead now finds his gaze fixed on the visage of a being very different from himself.  A newcomer like Jill Janus or M. Shadows is strangely familiar, shielded in the brawny invulnerability of classic metal, truly evoking what He-Man would look like, if that archetypal hero meant to us now what he did when we were children.

For some folk it sounds paradoxical, but to the extent Manowar is absurd, or that Judas Priest or Huntress occasionally borders on camp (e.g. the awesome “Sorrow” video, with lyrics penned by the 17 year old Jill), it is made more serious in exactly equal proportion– as only a madman or true hero literally laughs in the face of death.  As Udo would say, “I’m living for tonight.”

But leaving behind a world of hooded mystics and noble savages, heroes and dragons, not to mention wine, women & song, modern metal has pulled its tail all the way through the wormhole, and now resides in the desolate realm of the cold machine god.

The reclusive metalhead worries that to fully acknowledge a band like Huntress, a traveller outside of time, as legitimate and an equal would be tantamount to admitting that metal has made no structural progress, that at the end of the day, the rock & rollers were right, all that matters are songs.

But to dismiss the traveller for being “retro” is equally devastating, for now the poor modern metaller is making an admission that his own contemporary precious metal heroes will be irrelevant in a decade or two– which is indeed tantamount to denying the existence of any canon or way of ordering the world.

A few might posit that to be truly epic, you need to be both cutting edge and have great songs. But “cutting edge” is  a concept that is even more subjective than what constitutes a good song.  It’s not just the underground metaller who knows almost all his indie metal bands would be annihilated by such a stringent two-pronged test of greatness (to be crystal clear, I do not believe that the concepts of “technical innovation” or “cutting edge” compose a definable/valid prong on any such test.  If anything, greatness is a function of pure songwriting ability combined with raw conviction– when that alchemical combination occurs, the result is unique / “innovative” by definition every time).  Lacking any articulable argument, the worst of the Decibelite / MetalSucks crowd chooses to reject the occult maestros of Huntress and Blood Ceremony (mysteriously, he may accept Ghost), but cooks up a reason immune to accusations of sexism or hipster/nerd technical obsessions– he just makes the bald faced lie that the bands are average.

But such a lie is easy to see through.  In at least one parallel dimension Huntress are the biggest metal band on the planet.  Starbound Beast and Static sound like long-lost greatest hits albums curated for the impoverished denizens of our world by an old and loving portal-hopping wizard (this mysterious benefactor could be the same character depicted in Black Sabbath’s song “The Wizard”). 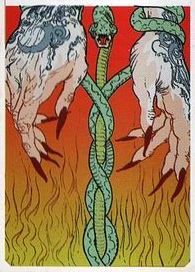